My name is Joey. I am an automotive gearhead and a tech geek of sorts. I am new to the raspberry pi world. I recently purchased a raspberry pi b+ shortly befoer they announced the RPi 2 B. I am looking at using my raspberry pi b+ in my dodge neon to do some on the fly tuning and performance enhancement and maybe even some ECU flashing. I am currently in the process of rebuilding the car and would like to integrate the RPi into my car as a tuner/performance enhancement when racing the car.....I would like to have multiple tunes, and be able to switch between them on the fly......Any help would be appreciated in this!!!

Hi, My name is Doug and I am new to the RP but am very impressed with the Pi 2. I have three of them so that I can experiment with different applications. Currently have one dedicated as a media server using OpenElec booting using Berryboot so that I can also use Raspbian. Haven't been that impressed with the Linux disto's at this point. Can't seem to get Raspbian to play youtube beyond 360. Have tested two ubuntu images with limited success. But having fun and doing a lot of research. I am an electrical engineer with a background in microprocessors and firmware mostly 6809, 6502, 68HC11 vintage parts ... then I went to the dark side so I'm a little dated on my technical abilities. I did start a side business providing tech support so I made sure that I have all of the latest and some of the old computer platforms and phones running (XP, Vista, Win 7, Win 8, ubuntu desktop, ubuntu server, Mac OS, iOS and android). Thanks to the foundation for providing the Pi to old and young alike!

Hi, I am Bancherd, a Thai-American living in Samut Prakarn, Thailand. I have ordered 3 Rpi2's to be used by my son and me.
My son is in high school and he is interested in computer engineering, both software and hardware; hence the Rpi's. One of the
Rpi's arrived early and we have been playing with it.

I'm razorThunder and I'm going to get my Pi as my birthday treat. I didn't have a taste of a Raspberry Pi yet, so here I come.

I just want to buy Raspberry Pi but before that I need some information...

I'm interested in SW (especially embedded), HW, SW engineering, fixing my car and my house, gardening, pets, science, politics, music (progressive rock + I play a little bass, guitar and keyboards), and a lot of other things, that doesn't come to mind right now. Oh, and finding time for all that.

I started "Linuxing" in '80s with RedHat (Picasso - I found the CD a few months back), and I've been using mainly Debian-derivatives (especially Mint). At the moment, however, my only "clear" Debian derivative is Kubuntu
My machines are:
Desktop: Gigabyte GA-B75M-D3H+Intel i3 - Kubuntu
Desktop: HP Pavilion a6622sc - triple boot Vista/Sabayon/Gentoo (in progress)
Laptop: Fujitsu Siemens Amilo Li 2735 / Vista
Laptop: IBM ThinkPad T42 / Slackware
Minilaptop: Samsung N150 / Windows 7
I also carry Puppy Lupu on a memory stick with me.

I've been laid off indefinitely for about half a year now (after almost 20 years) and I'm still busy - fixing friends' and relatives' computers.

I became a widower about 4 months ago, and I live now with 2 cats and a puppy (dog, although I have Puppy Linux on a memory stick too.

I've been a member since January 2014, but got my first Pi 2 days ago.
I bought RasPi for (mostly) bare metal embedded target, but I guess getting to know RasPi is
easier using Raspbian.

Yesterday I bought two SD cards, on one of which I installed Raspbian.
VERY EASY! Even if I don't have a display cable (so what could I have done with mouse or keyboard either). The guys that wrote the Raspbian boot have done EXCELLENT job.
I wrote the image on the card, connected network cable to my ADSL-box/router/DHCP-server, and
powered the board. After I saw the lease for Raspbian in the lease list of the ADSL-box, I just ssh'd into Raspberry. Also remote X terminal worked O-O-B! (Well, had to 'xhost' the laptop I used.)
De-bugging is for sissies - real men do de-monstrations. 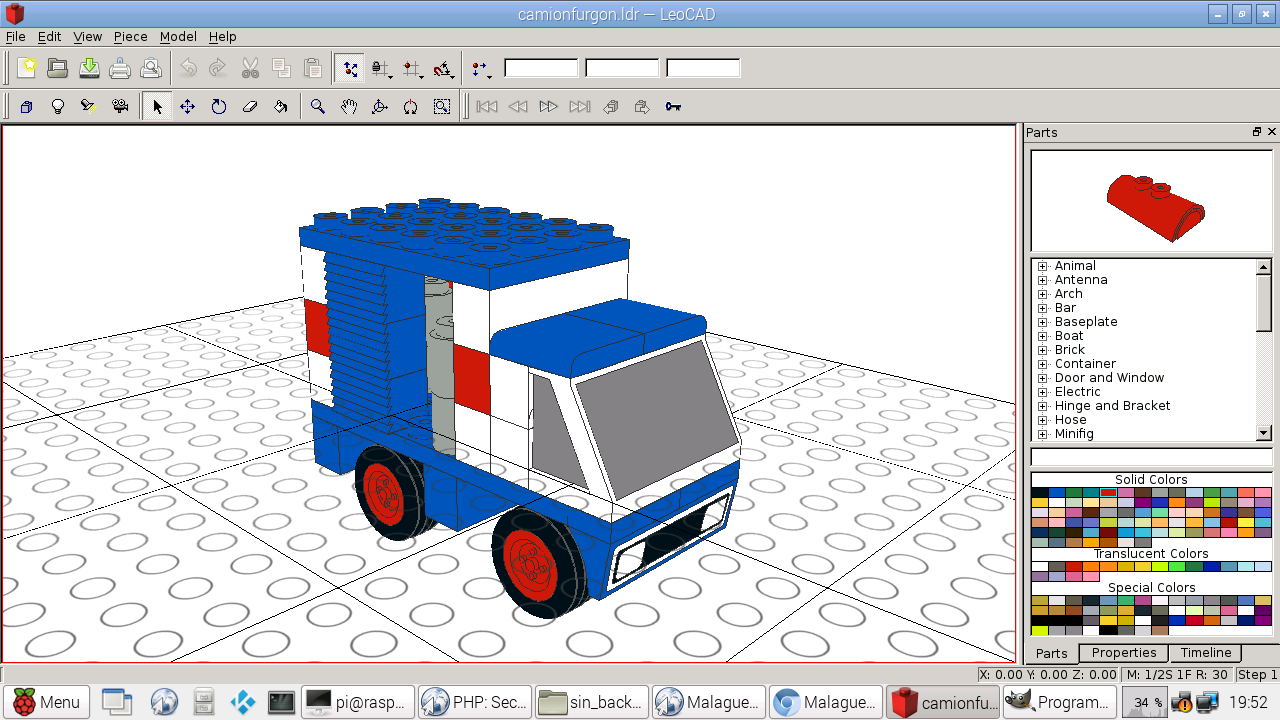 My goal is modest, use it like a general propose computer for the TV set and media center using only raspbian.

I am Matt and I live in the United States of America.....I want to thank the Pi Foundation, Eben and every single person involved in the planning, development, production, marketing, sales, and any part of the Alpha to the Omega of this project that I forgot....I am the single father of an 11yr-old Autistic boy in the High Functioning(descriptor) end of the Spectrum...With the behavioral, sensory and socio-cognitive issues that come along with his particular flavor of Autism, life in the public school system has been a trial by fire and I am burnt out....in conjunction with my realization that the only way my child would receive any adequate education that he could apply to a functioning living I would have to homeschool him, he announced a curiosity in electronics and I found Arduino which of course led to a discovery of RasPi...after an exhaustive online research scrum for resources, the purchase of our first Uno and an electronics kit from Sparkle Labs, and a library volume of books I bought the new Pi2 and have since acquired more Arduino boards and supplies and hardware for future hacks and builds I have settled on a homeschool curriculum that will allow me the time to work into the educational structure some courses on programming, electronics and maker/hacker/builder skills....Your, and Massimo's, wonderful little gadgets have also rekindled my pre-teen/teen geekness for electronics and computers, and helped build a relationship of mutual interest and education with my son....it has been nice to have a meeting of the minds with him on something....Thank you for your part in this!!!

Hello there,
I'm a hobbyist from Serbia, I used to own the RPi Model B back in the day for some useless projects,
and now plan on using RPi 2 B for some more useless projects.
It's hard to get an original idea, pretty much everything is already covered by the wonderful Pi community.
That's it, I guess

Hi i,m Tim
Started with a zx81, then spectrum, then pcs, then arduino and now pi2.

Using my pi2 as my main pc.
Have kweb installed, which is good for youtube. Libreoffice mainly for calc. Wireless printing is working. Mame4all installed for entertainment.
Espeak so that pi can say hello and goodbye etc.
Iplayer is working in openelec which i can boot into using berryboot.
Have a wireless keyboard and mouse so pi can remain hidden behind monitor.
Last edited by lumsdot on Mon Oct 26, 2015 5:57 am, edited 1 time in total.

I'm used lots of intel+microsoft combination for years. I know they are not compatible with my ideals. They are capitalist world money building mechanism for me.

I was very unlucky. My java applets flied with broken hdd. Every time one of my computer equipment was broken when i'm was started studying some language.3 times.

I'm trying get better every day use computer. If i can success enough for me then i can start hobbyist projects. I'm planning studying about java/python.
I cant using enough English language. My writings can be wrong grammer.$
"in micro$oft we not trust"

Pi 2 owner here, planning on doing some embedded work with the Pi.

Initial experience as good. Got some help from my friends on the Parallax forums. Hope you are all having fun! I plan to.

spud, my man, we meet again!

Let's bring the Propeller to the Pi world. Many of them would like it!
Memory in C++ is a leaky abstraction .

Hello everybody, I m Eric and lil bit lost in this forum now

I need to orientate the first

My Name's Dave. I stumbled across Raspberry Pi's while searching for Gameboy related stuff. I could fit everything I know about computers on the back of a matchbox, so this will be a learning curve to say the least.

The reason that I'm here is that I would like to make a Retro Gaming Coffee Table and this Forum seemed like an ideal place to start.

I hope to bring you an update soon. Regards, Dave

Heater! We got the same usernames!

You know it buddy.

Right now, I'm soaking up all the Pi goodness. All fun so far.

Hi guys, my name is Reuben. I'm a computer guy in Chicago. Been meaning to get into the Pi for a while and I have a project at work that finally gave me the excuse. I like it already and I'm probably going to buy one or two for personal use after seeing how amazing this device is firsthand.

Hey I am Isaac and I am from New York this is my website http://neonorbit.weebly.com/. I am 16 and I love to make youtube videos

Hi, i'm Pedro and i'm doing a proyect witch Raspberry Pi B+. I hope you can help me

Hi people, I'm Larry from the frozen tundra of the USA. (We just had another 10" of snow *shrugs and smiles*). I became interested in Raspberry Pi when the Raspberry Pi 2 was announced and quickly bought one and began assembling components to make it a working system. Its up and running now and I am enjoying refreshing my linux skills as I get it set up to do a little experimental python programming.

I'm retired from IBM and have designed computers (well portions thereof) and written programs to model them as well. My first programming language was Fortran (yes, on punched cards) and my last was C++, Python and SystemC.

My goals for my Raspberry Pi (known as Rainbow) are to 1) Have fun some Python programming, 2) See if I can interest my grandchildren in it as they grow older.

Good to hear from you! ... yes, planning to be active here, and on Intel site (edison) as well.

I almost blew my Raspberry PI this morning! I got ahold of a wedge from Sparkfun that got the ribbon cable connector soldered in on the wrong side of the board! All the pins were backwards... and if I had not checked voltages just one more time before I started plugging in wires, oh man... I'd be ordering another RP instead of just a B+ wedge!

'ey, have a great day!
marcus

if you have any problems with the raspberry pi like i did this is a good webpage to go to for helhttp://raspberrypiestuff.blogspot.co.nz/

[mod edit] No it isn't, it's your blog, and it features a small handful of posts which may be interesting, but which do not offer any help. You may be planing to put more useful information up there, and if you do then good for you. But please do not falsely advertise it and do not put a link to it in every post you write. Thank-you.
Post Reply
3626 posts